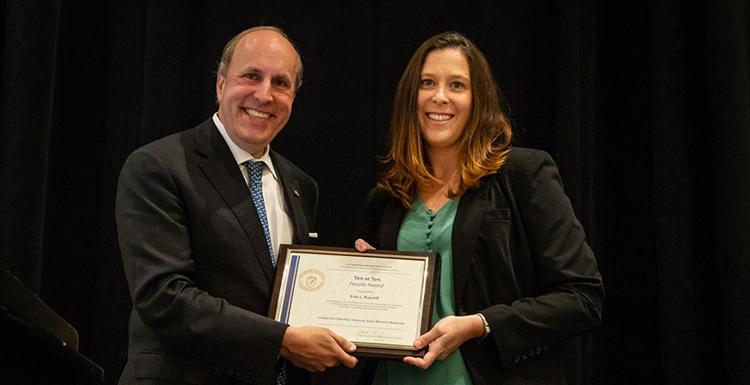 Assistant professor Erin Ratcliff was one of only three individuals to receive national recognition for her involvement with the U.S. Department of Energy's Energy Frontier Research Centers.

In honor of the centers’ 10-year anniversary, the DOE Office of Basic Energy Sciences reviewed the 82 centers, 1,600 senior investigators and 5,400 students across 170 institutions involved in the program over the last decade. The office recognized 10 groups of researchers or individual researchers who exemplified the centers’ mission. Ratcliff was one of three individual researchers so honored. Three of the other Ten at Ten awards went to technologies and tools, and four to scientific ideas.

Ratcliff first came to the UA as a postdoctoral researcher in chemistry, working in a lab run by Neal Armstrong, UA Regents’ Professor of chemistry, biochemistry and optical sciences.

In 2009, when the DOE awarded the UA $15 million to lead the Center for Interface Science: Solar Electric Materials, Armstrong, as the center director, decided she'd be a perfect fit for the project.

Armstrong said Ratcliff was like the glue that held the parts of the center together. She traveled between sites, led the development of a lexicon everyone involved could understand, and often worked on papers with four or five groups at a time.

“She was the person who had the motivation and the instincts to stitch these disparate groups together with her scientific activities and her personality,” Armstrong said. “She’s pretty fabulous. A real role model for women in engineering and for what it takes to be successful in this modern funding world.”